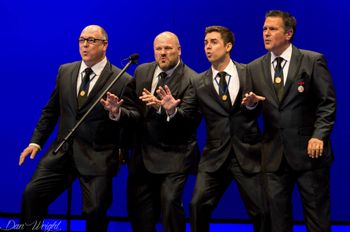 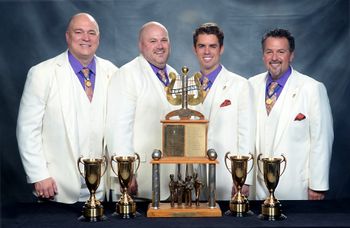 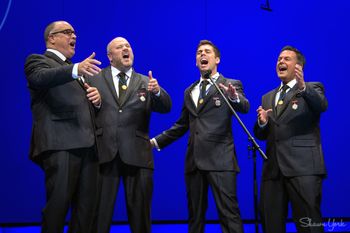 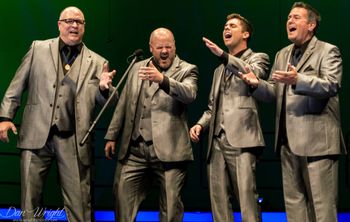 Masterpiece… a supreme artistic achievement; sometimes the work of one, sometimes a collaboration of many.  In the world of vocal music, it is the marriage of multiple efforts to seamlessly become one.  Rob, Patrick, Alan, and Brett have enjoyed success in various groups over their varied musical histories, and have finally come together to share a unique sound and experience with their audience.

Masterpiece is thrilled to be your 2013 Barbershop Harmony Society International Quartet Champion.

All of them hailing from the Masters of Harmony, 8-time World Champion Chorus, Masterpiece features:

Rob Menaker, Tenor… began his singing career 40 years ago in his hometown of Columbia, Maryland.  After moving to California, Rob sang many musical styles with the UCLA Men's Glee Club, touring the U.S. and Far East while expanding his vocal abilities.  After graduating, his effortless tenor voice made him a valuable commodity to many groups, culminating in a 1996 International Quartet Championship with Nightlife.    In the Masters of Harmony, his vocal consistency and color have served as a model for the tenor singers for all 8 chorus championships.  Rob lives in Gardena, CA, with his wife, Pat.

Patrick Haedtler, Lead… was introduced to barbershop at the age of 12 when he joined the San Jose Chapter in Northern California with his father and brother.  He moved to Southern California to attend Cal Poly and complete his degree in Mechanical Engineering and Mathematics.  After his move south, Patrick promptly joined the Masters of Harmony and the International Chorus Champions, The Westminster Chorus.  Most recently Patrick sang with The Crush, 2-time FWD Silver Medalist, 2007 Collegiate Quartet Silver Medalist, and 2013 International Finalist.  Patrick resides with his wife, Sara, in Huntington Beach, CA.

Alan Gordon, Baritone… is a "barbershop brat," having been introduced to the avocation through the involvement of both parents in San Jose, Ca.  With music in the family room almost every night, it wasn't a surprise that he was harmonizing with his sister at age 5.  That early start has imbedded in Alan a vocal flexibility that allows for chameleon-like blending through a wide range.  After moving to Southern California, he joined the Masters, leading in various positions and ending up with the formation of Gotcha!, who became Quartet Champions in 2004.  Alan and his wife, Cyndi, live in Fullerton, CA, with their daughter, Molly.

Brett Littlefield, Bass… is the only native Southern Californian in the group.  Hailing from Westminster, Brett started his barbershop singing straight out of high school, and the vocal world has been thankful.  Demonstrating the depth of a gospel singer with the warmth of a crooner, Brett anchored the 1996 Champions with Rob in Nightlife.  Brett has been active with the Masters for over 20 years, serving as bass section leader, director, and assistant director.  Brett and Rob share a distinction of being among few men who have won a chorus and quartet championship on the same day!  Father to Johnathan, Cody, and Sara, Brett makes his home in Orange, CA, with his wife, Karen.

We hope you are to be rewarded by Masterpiece - a quartet and sound of distinction!